The Ogun State Police Command is presently searching for a bar manager, Mr. Bidemi sh*ttu, who allegedly poured petrol on his 13-year-old attendant, Ezekiel Emmanuel, and set him ablaze. It was gathered that the manager took the action because the teenager reportedly stole N1,500 from him. 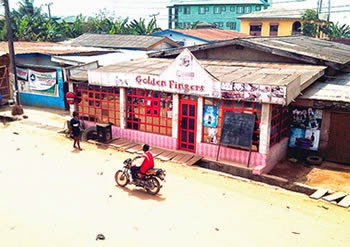 PUNCH Metro learnt that the incident happened in the Akoka area of Ibafo, Ogun State, on Monday, February 9. The runaway suspect, Bidemi, who is married with children, was the manager of Golden

Fingers Bar in the area, while Emmanuel was one of his attendants.

Bidemi, who had accused Emmanuel of theft on Sunday, allegedly tied the teenagerâ€™s hands and feet in a room in his bar till Monday, waiting for him to admit the offence.

It was gathered that on Monday, at about 11.30pm, Bidemi brought Emmanuel out to the front of the bar, poured petrol on the boy and set fire on him. Luckily, some residents, who were out at the time, rescued the victim.

They were said to have rushed Emmanuel to a private hospital in the area where he was initially treated before he was referred to the Lagos State University Teaching Hospital, Ikeja, Lagos, the following day.

PUNCH Metro learnt that the matter was reported to the Ibafo Police Division, and the policemen sealed off the bar. However, it was gathered that the suspect, Bidemi, fled before he could be arrested.

When their correspondent got to the area on Thursday, Emmanuelâ€™s uncle, Mr. Toyin Olayemi, said the boy was rejected by four different hospitals before he was eventually taken to LASUTH.

â€œEmmanuelâ€™s father is not around. He went to his hometown in Ekiti because he fell ill. On Tuesday morning when they told me about Emmanuel. I rushed to the private hospital and I saw him on the bed, severely burnt from head to abdomen.

He was working on part-time basis in the bar, although Bidemi did not pay him any salary. Emmanuel is also learning generator repair at a workshop. I was told that the manager accused him of stealing N1,500.

Despite pleas from neighbours that they would repay him, he waited till everyone had gone to sleep and brought out the boy and burnt his body.

The private hospital asked us to take him away the following day. We went to about four government hospitals which rejected him before we came to LASUTH.

Since that Tuesday, they have not allowed us to see him. They said he was still under observation. The suspect too has run away. We learnt that a policeman in the Ibafo division tipped Bidemi off to evade arrest.â€

When Punch visited the suspectâ€™s father, Pa sh*ttu, he said that the most important thing was for the victim to get well. He said:

â€œMy wife went to check the boy in the hospital. The doctors did not allow her to see him, but they told her that he was responding to treatment. I have spent about N150,000 on his treatment. I have not seen Bidemi. I donâ€™t know his whereabouts. He has refused to pick my calls. The most important thing is for the child to get well.â€

On getting to the private hospital in Ibafo where Emmanuel was initially treated, the doctor said he ensured that he was in a stable condition before he was transferred.

The Police Public Relations Officer, DSP Muyiwa Adejobi, confirmed the incident. He added that the police were intensifying efforts to arrest the suspect. He said:

â€œThe suspect poured petrol on the boy for stealing. He maltreated him, tied his hands and feet, and set him on fire. The boy is still in the hospital and the suspect is presently at large. But the police will arrest the suspect.

This act is not only criminal, but also barbaric. We are intensifying efforts to get him and we will.â€