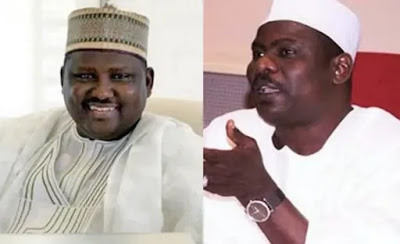 The Chairman, Senate Committee on the Army, Senator Ali Ndume, said he has instructed his legal team to begin the process of terminating the surety bond he signed for captured fugitive Abdulrasheed Maina.

The senator from Borno said he could no longer continue to stand surety for the former chairman of the defunct Pension Reform Task Force Team, because he has proven to be untrustworthy.

Abdulrasheed Maina, who jumped bail was on Friday ordered by a Federal High Court to be remanded in custody till the end of his trial.

Maina, who is being prosecuted by the EFCC on N2 billion money laundering charge, had jumped bail and fled to the Republic of Niger.

But he was returned to court for the first time on Friday following his extradition to Nigeria on Thursday.

Ndume, who is representing Borno South Senatorial District in the Senate, stood surety for Maina, his constituent, because the court asked Maina to produce a serving senator as his surety, as part of his bail condition.

Ndume commended the Inspector-General of Police (Mohammed Adamu) and other security personnel that were involved in the arrest and extradition of Maina.

“I commend the Nigeria Police Force for executing the bench warrant issued on Maina by the Federal High Court in Abuja.