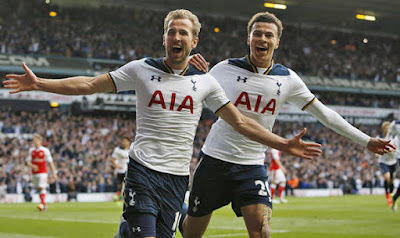 A crowd of 2,000 Tottenham fans enjoyed their return for the first time in nine months as Harry Kane and Son Heung-min combined again to beat Arsenal 2-0 and move back top of the Premier League on Sunday.

Jose Mourinho’s men moved two points clear of Chelsea at the summit with another statement performance to display their credentials to win a first league title in 60 years.

Kane and Son have now scored a combined 27 goals in all competitions this season and also turned provider for each other to catch Arsenal cold on the counter-attack.

At the other end of the table, a fifth defeat in seven league games for the Gunners leaves Mikel Arteta’s men languishing in 15th.

Arsenal also lost £45 million ($59 million) midfielder Thomas Partey to the recurrence of a thigh injury, which played its part in Son teeing up Kane for Spurs’ second goal just before the break.

Tottenham are now unbeaten in 10 league games and look prime contenders to make the most in a dip in the standards set by an injury-hit Liverpool and Manchester City in recent seasons should they keep Kane and Son fit.

The South Korean opened the scoring in stunning fashion as he collected Kane’s pass down the left and cut inside to curl into the top corner.

That was the 10th of Son’s 13 goals this season for which Kane provided the assist.

By contrast, Arsenal have scored just 10 goals in 11 league games all season and despite plenty of intricate build-up play, Arteta’s men again failed to provide any cutting edge in the final third.

The difference between the teams was summed up in first-half stoppage time as from what appeared a dangerous Arsenal attack, one long ball saw Spurs breaking with four against two as Partey had already pulled up with an injury.

Son took his time before feeding Kane, who smashed in off the underside of the bar from a narrow angle to double Tottenham’s lead and realistically end any doubt over the outcome given Arsenal’s struggles in front of goal.