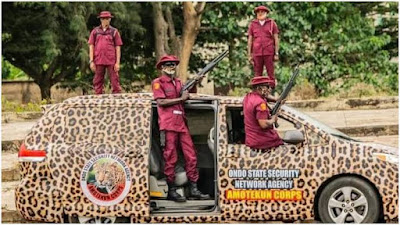 Two suspected cattle rustlers and one herdsman were on Wednesday arrested by the men of the Ondo State Security Network Agency, otherwise known as Amotekun Corps.

The arrests were made following an attack by the suspects on operatives of the corps.

Equally, men of the security agency seized 16 cows that destroyed farmers’ crops at Osi Community in Akure North Local Government Area of the state while one unlicensed gun and other weapons were recovered from them.

According to the Commander of the Corps, Adetunji Adeleye, who disclosed the arrest at the agency’s headquarters in Akure, it was surprising to his men that rather than heed the advice of stopping their cattle from further destroying the crops on the farmland, the herders began to attack Amotekun officers during which one of them was overpowered and arrested with sixteen of the ravaging cows.

Narrating how the cattle rustlers were arrested, the commander said the men, were apprehended, with the aid of intelligence.

“Alhaji Ilyasu, a Fulani man, came to us and complained that some people came with a Serena Bus to steal their cattle. They came to us and we sent our men out. We were able to recover the vehicle they wanted to use in stealing the cows, we also recovered the cows.

“We were able to trace some of the rustlers that ran away to somewhere in Ogun State. We have apprehended one Sudauna Gombe and one Ogunyale Sola, who was the driver of the abandoned Serena Bus

“We have handed them over to the Agro Department of the Nigeria Security and Civil Defence Corps, NSCDC, for detailed investigation.

“The cattle rustling case occurred near NIROWI forest along Ore-Lagos Road before step-down in Omotosho.

“We recovered two cows, which we have returned to the Fulani man that owns them, and we brought the vehicle to our office here because the rustlers ran away and abandoned the vehicle. But we were able to arrest those involved and they had confessed that they had been in the trade for some time.”

Adeleye also said that the Amotekun Corps, have arrested one Lawal Abubakar along Ago Panu Forest near Owo on the way to Ose while in possession of a gun without a license.

He said the suspect would be handed over to the police for further investigation and possible prosecution.

The Commander said the security agency has held a series of meetings with the Miyetti Allah leaders from Ondo, Ekiti and Osun States to educate them that Amotekun is for them all.