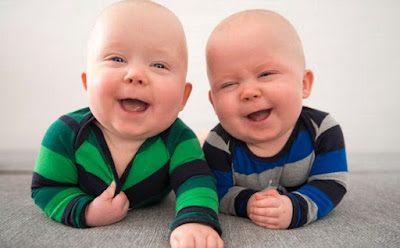 A woman who was struggling to tell her twins apart had one tattooed, leaving her mother-in-law furious.

The 31-year-old mum had her two little boys Adam and Jack after five years of trying for children.

But because Jack was born with a condition that requires him to be injected once a week, she decided to get him tattooed so she could administer the medication to the right baby, reports Daily Star.

Explaining what forced her to make this decision, she said that when she went back to work, her mother-in-law offered to babysit, but during that time she accidentally injected Adam instead of Jack.

"She gave the shot to the wrong kid," she said.

"Now they may be fraternal but they look identical. I'll be honest my husband and I even mix them up sometimes. Everyone does.

"She immediately noticed her mistake called 911 and they were transferred to hospital.

"By the time I got there Adam had been given the reversal agent and they were both happily sipping on juice loving the attention."

"He was never in danger. It’s a very slow-acting medication that, at worst, would have given him diarrhoea in a few days. Mother-in-law was beside herself.

"I tried to ease her worry but she refused to babysit so to daycare they went."

To stop it from happening again, she said her doctor recommended a medical tattoo - a freckle, no bigger than the end of a pencil eraser, on an area of skin that's easily seen, while the child is under mild sedation similar to dental offices.

And in two to three years - when the babies have developed more personal features - it will begin to fade.

But as soon as her mother-in-law discovered what she had done, she 'lost her s**t'.

The parent went on: "I tried to explain but she just freaked out so I put both kids on the floor and told her to pick up Jack and find the tattoo.

"She picked up Adam So I handed her Jack and after 20 minutes still couldn't find it. Stripped him to his skivvies."

She added: "I finally pointed it out and she went 'That's just a freckle' I just said... 'My point exactly. Adam doesn't have a freckle there.. So that's how daycare can tell them apart.'

"She's still p****d and ranting. Once I explain to others and they fail to find it they understand but they still think I went too far in tattooing my child and altering their body."

The mum shared the post to Reddit in the hopes that readers would assure her she did the right thing - and they were very understanding.

One said: "I’d rather tattoo my kids with Barney the dinosaur on their whole body than risk messing up medication."

Another said: "It’s literally a fake freckle. It’s not like you gave him a full sleeve of pin-up girls and muscle cars."