Death Of 16 Travellers On Kaduna-Abuja Road: THE TRUTH 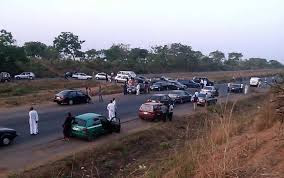 The Nigerian police have released a statement on the incident that happened on Kaduna-Abuja road on the 8th of December, 2020 saying it was a case of lone vehicular accident and not that gunmen opened fire on innocent Nigerians like many suggested.

Recall 16 people all along had died on the highway.

Nine died instantly, while seven out of the 10 badly injured gave up the ghost at the hospital.

The Police press statement clearing the air below...

''The attention of the Force has been drawn to reports in some section of the media speculating that Gunmen killed 16 Travellers on Abuja – Kaduna Highway on 8th December, 2020. The Force wishes to state that the information is false and unfounded.

''To set the record straight, the unfortunate death of the 16 travellers as well as injury to 3 others was due to a lone fatal vehicular accident.

''The sad event occurred on 8th December, 2020 at about 0120hrs when the driver of an 18-Seater Hummer Bus, Reg. No. FGE 553 ZS, belonging to Yasalam Transport lost control and summersaulted severally around ALCON Filling Station, Rigachukun, Igabi LGA in Kaduna State.

''Investigation by the Kaduna State Police Command reveals that nine (9) passengers died on the spot while ten (10) others, who sustained various degrees of injury, were quickly rushed to the St. Gerald’s Hospital, Kakuri.

''However, seven (7) of the injured victims subsequently gave up the ghost, bringing the total of the dead to 16. Three (3) of the remaining passengers are receiving medical treatment.