My Brother Shot, Hacked To Death By Sergeant Dagbo: Petitioner 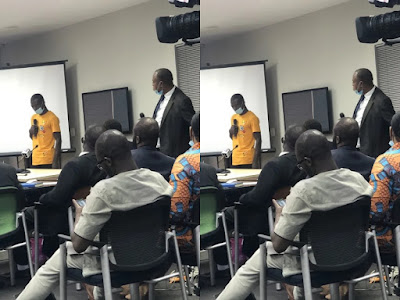 Felix Lucky, a petitioner at the Lagos Judicial panel told the panel his brother, Paul Lucky was shot and hacked to death by a police officer, Sergeant John Dagbo.

The petitioner who was represented by Mr. F.O Udokporoh said his brother was killed by Sergeant Dagbo after an altercation between the officer and the deceased.

Felix said his late brother, a driver and a vigilante at Jakande Estate in Lekki was on duty one night and Sergeant Dagbo appeared at the deceased work post without his uniform.

They had a misunderstanding leading to the police seizing the deceased torchlight and machete.

Felix said he went to see Sergeant Dagbo about the misunderstanding between his brother and the officer the following day.

He said that the officer threatened he would kill his brother.

On 20th Oct, Felix told the panel he was called suddenly in the afternoon that his brother had been shot by Sergeant Dagbo.

He said when he got to the scene, a lot of people were there running around and he was told his brother had died after being shot.

The case was adjourned till January 5 2021 for further hearing.

Witnesses are expected at the adjourned date.