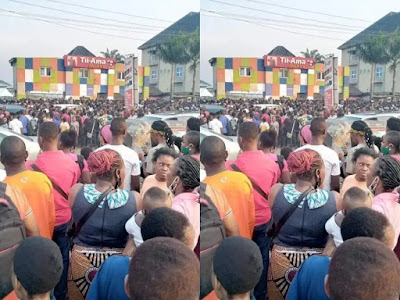 Four persons were feared dead, while many others were injured during scramble for Christmas palliatives on Tuesday morning at the Rumuodara community, a suburb of Port Harcourt, the capital of Rivers State.

It was learnt that people in and around the community had in their thousands stormed an event centre in the area where INKSNATION, a non-governmental organization, was distributing items to its members from Ikwerre, Emohua and Obio/Akpor Local Government Areas of the state as early as 8 am.

Due to poor crowd management and the surge of persons who were not invited, the situation got out of control, leading to a stampede during which some persons fell and were trampled upon while others sustained injuries.

It was also gathered that the situation arouse because the organisation did not make any arrangement for control and orderly conduct of the thousands of people it invited for the event from three local government areas.

The Rivers Police Command confirmed the incident, but said only two persons have so far been confirmed dead in the stampede.

“I can confirm the incident of this morning, at an Event centre, along the Rumuodara axis of the East/West Road, Obio/Akpor LGA, where palliatives were being distributed by INKSNATION, a Non-Governmental Organisation to her registered members from Ikwerre, Emohua and Obio/Akpor Local Government Areas, when suddenly there was a stampede leading to the death of two people, while some sustained various degrees of injuries and are currently receiving medical attention.

“Meanwhile the situation is under control. The Commissioner of Police, CP Joseph G Mukan has instituted immediate probe into the unfortunate incident with a view to ascertaining the circumstances and bringing persons found culpable to Justice,” Nnamdi Omoni, the police public relations officer said in a statement he issued to journalists.

The event resulted in several hours of traffic gridlock which trapped many motorists during the morning rush hours of Tuesday.