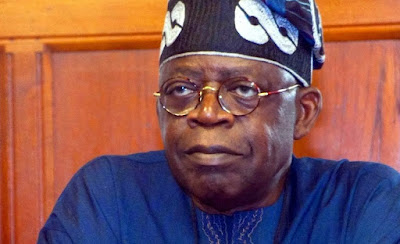 A group of former senators, House of Representatives members and other politicians across the Southwest geo-political zone has urged the National Leader of the All Progressives Congress (APC), Asiwaju Bola Tinubu, to contest as president in the 2023 election.

They spoke on Tuesday at the unveiling of the group’s logo in Ibadan, the Oyo State capital.

Membership of the group spreads across the six states in the Southwest.

The National Coordinator, Northern Region Support Tinubu for 2023, Hamman Dikko, was also there. They urged Tinubu to contest.

The group started the campaign on Monday with visits to the Olubadan of Ibadan, Oba Saliu Adetunji and Alaafin of Oyo Oba Lamidi Olayiwola Adeyemi III during which they conveyed its agenda to the leading monarchs.

The group said members came together to actualise the agenda for the Southwest to produce the next President in 2023.

It has Senator Adesoji Akanbi as Vice Chairman and Bosun Oladele as Secretary.