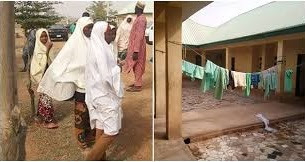 The students abducted from Government Girls Secondary School, Jangebe, in Talata Mafara Local Government Area of Zamfara State, are still with their captors, the state government has said.

He made the clarification following media reports that the girls had regained freedom.

Mr Idris said the governor had just concluded a meeting with traditional rulers in the state at Government House, Gusau, towards ensuring safe return of the students.

The commissioner of police in the state, Abutu Yaro, also said the girls were yet to be released.

“I want to call the attention of the good people of Zamfara State, they should disregard any fake news regarding the release of the abducted students of GGSS Jangebe by one national daily. It’s not true. But, Alhamdulillah, the state government and securities are their trying their best,” he said in a short to PT.