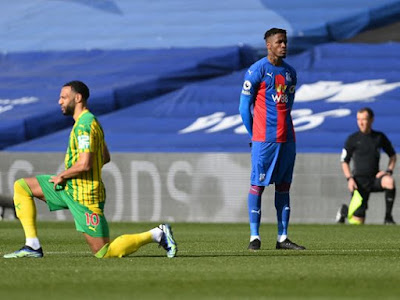 On Saturday, the Crystal Palace attacker refused to kneel ahead of his side's match against West Brom, demanding more meaningful action be taken against racism.

“My decision to stand at kick-off has been public knowledge for a couple of weeks now,” wrote Zaha in a statement.

“There is no right or wrong decision, but for me personally I feel kneeling has just become a part of the pre-match routine and at the moment it doesn’t matter whether we kneel or stand, some of us still continue to receive abuse," he added.

Last season, the EPL introduced kneeling on match days to show solidarity with the Black Lives Matter movement in America.

Colin Kaepernick first took a knee during the American national anthem in the National Football League (NFL) in 2016, as a symbol of resistance against police brutality. Kaepernick disrupted the status quo and was forced to become an NFL pariah because of his stance against injustice.

Zaha says he respects any player who continues to kneel.

“I know there is a lot of work being done behind the scenes at the Premier League and other authorities to make change and I fully respect that and everyone involved. I also full respect my teammates and players at other clubs who continue to take the knee,” he added.

“As a society, I feel we should be encouraging better education in schools, and social media companies should be taking stronger action against people abuse others online – not just footballers.

“I now just want to focus on football and enjoy being back playing on the pitch.

“I will continue to stand tall.”