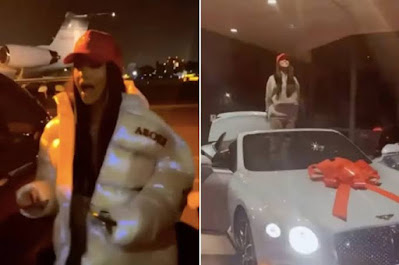 Migos rapper Quavo got back $350,000 from his ex-girlfriend Saweetie, in the wee hours of the morning.

MTO News spoke with a person close to the Migos star who said Quavo has repossessed the 2021 Bentley convertible that he "gifted" to Saweetie for Christmas.

The insider, who MTO confirms is close with Quavo explained, "Quavo's no dummy - the Bentley wasn't in her name."

The friend claims that the Bentley was "leased" in Quavo's name. And that the Migos rapper had a deal with the dealership that he could for a fee end the lease early, and the dealership would repossess the car and let him out of the contract.

And that's exactly what Quavo did, according to his friend.

The insider continued, "He's not being petty or anything, but she's on Twitter talking sh*t. So he took back the car."

The insider claims that Saweetie's car was taken from outside Saweetie's home - very early this morning.