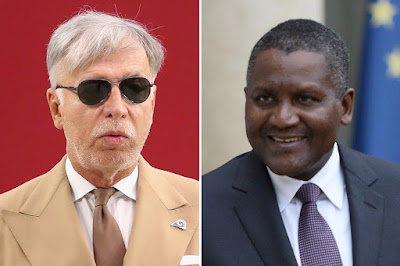 Former Arsenal striker Kevin Campbell wants Nigerian billionaire, Aliko Dangote, as the new owner of the English Premier League side despite Stan Kroenke insisting the North London club is not for sale.

Dangote’s long-time ambition of acquiring Arsenal hit a snag after the club’s director, Josh Kroenke, the son of Arsenal owner Stan Kroenke, revealed they had no plans to sell the club.

Kroenke stated this Friday following backlash from fans over their involvement in the breakaway European Super League.

Arsenal were one of six English clubs who signed up for the project before withdrawing amid a storm of protest from fans, players and the British government, alongside threats of bans and sanctions from the game’s European and world governing bodies.

While addressing the fans, Kroenke, whose father Stan Kroenke struck a deal to take full control of Arsenal in 2018, said they had no intention of selling and that they believed they were fit to carry on in their position as custodians of the club.

“We have no intention of selling; I believe we are fit to carry on in our position as custodians of Arsenal. We were put in a very difficult position by forces outside of the club,” Kroenke was quoted as saying on Sky Sports.

“We were put in a very difficult position by forces outside of the club. We have the same plans for summer that we had several weeks ago and I’m still excited about those.

“I might be met with mistrust and skepticism, but over time I hope to establish some sort of relationship with our supporter groups and show them we are capable of taking our club forward.”

However, Campbell and some Arsenal fans believe it’s time Dangote took over the club.

“100 per cent, I would love to see him take over,” Campbell said when he asked if he would welcome a Dangote takeover in an interview with Football Insider.

“First and foremost he is a massive fan of Arsenal. He is also one of the wealthiest guys around. He has got the money. That is the key. He has more than got the money.

“As a fan of the club he would want to put us back on the right footing. 100 per cent, I would love it to happen. I would absolutely love it.

“At the end of the day, all fans can hope for is an owner who cares. You want the owner to put the best possible product out on the pitch.

“It is not like how it was in the 70s and 80s. These football clubs are global entities.”