My Dad Wanted Me To Be A Mechanic — Taribo West 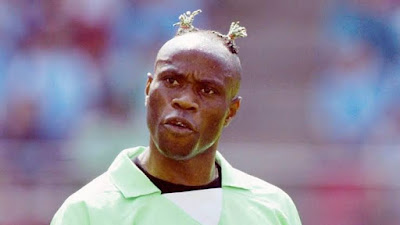 “My journey to being a world-famous soccer player wasn’t easy. The war started right from my father’s house in far-away Port Harcourt, some decades ago. My father actually wanted me to be a roadside mechanic”.

With these words, former Super Eagles of Nigeria and AC Milan of Italy player, Taribo West, told his story of growing up.

Narrating the story further, he said his mum disapproved of his father’s wish that he should be a mechanic.

His words: “My mother resisted strongly. She begged and begged him to allow me have, at least, a secondary school education, but he refused.

“The struggle led me to running away from my father’s house in Port Harcourt, many years ago, at a very tender age, to Lagos, and there stated my struggles”.

Taribo West spoke during an occasion to honour him with Lifetime Achievement award, by a Lagos-based media company, Our Moment Newspaper, in Lagos.

The former Super Eagles Defender was honoured alongside some Nigerians who have distinguished themselves in their various fields.

Taribo West went on: “But, I thank God that all that is history now. I am the rejected stone that later became the corner stone of the house”. When asked what business he ventured into after retiring from football, he said: “After quitting football, I ventured into football academy, philanthropy and missionary work.

“I run a football academy in Lagos where we discover and train young talents for European clubs.

“I am involved in philanthropic works where we assist so many indigent students and business men and women.

“Then, I am the General Overseer of Shelter in the Storm Ministry, an end-time deliverance church in Lagos.”

He thanked the organisers of the award for picking him ahead of many former Super Eagles players.

His words: “I thank the organisers of this award for honouring me today. I am indeed grateful”.

During his illustrious career, he played for big European clubs like Auxerre, Inter Milan, AC Milan, Derby County among others, winning many laurels.

In his opening remarks at the event, the Editor of Our Moment Newspaper, David Olanrewaju, thanked all those who made it to the event and advised all the award recipients to keep the spirit and continue to do more for humanity.

He said: “I am very glad this evening to witness this great occasion. This is an event that was first held in 2006 and it has continued to wax stronger every year.

“This year’s event was slightly affected by the coronavirus pandemic as forty percent of invited guests could not make it to the occasion.