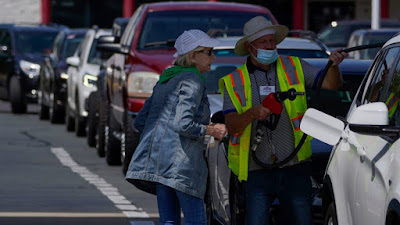 The Colonial Pipeline, which delivers more than 70 per cent of fuel to Georgia, South Carolina, North Carolina, Tennessee and Virginia was hit by a cyberattack last week, leading to an indefinite shut down by its operation to curb its spread.

The Colonial had in a statement said it proactively took certain systems offline to contain the threat, which has temporarily halted all pipeline operations and affected some of our IT systems, media reports said.

“We had people waiting before we even got here,” Mr Desai said, adding that cars began lining up around 6:30 a.m.

ABC reported pumps were shut down around 2:00 p.m. and it was unclear when the next fuel delivery would be made.

Energy Secretary Jennifer Granholm on Tuesday warned that “there should be no cause for hoarding gasoline, especially in light of the fact that the pipeline should be substantially operational by the end of this week and over the weekend.”

The American Automobile Association (AAA) had said national gas price stood at $2.98 on Tuesday, an eight-cent increase on the week.

American Airlines is also feeling the impacts of the attack, as planes now have stops on some of the long-haul routes for refuelling.

FBI had confirmed that the Darkside ransomware “was responsible for the compromise of the Colonial Pipeline networks,” while assuring it would “continue to work with the company and our government partners on the investigation.”