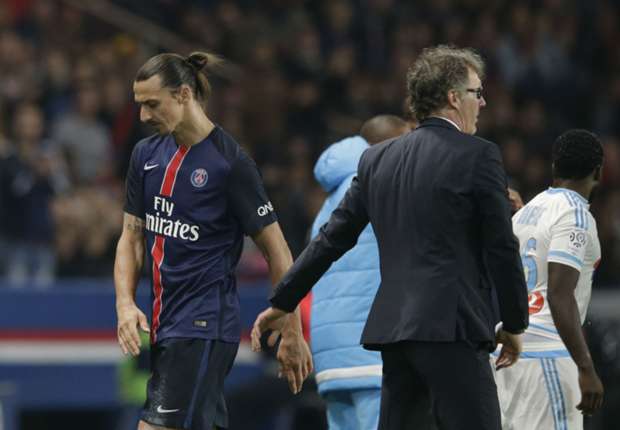 The Sweden international scored twice against Marseille on Sunday to take his tally to 110 goals, one more than PSG icon Pauleta.

Paris Saint-Germain boss Laurent Blanc says that he is not in the least bit surprised that the "great" Zlatan Ibrahimovic has managed to become the club's all-time record goalscorer in just over three years at the Parc des Princes.

Ibrahimovic converted twice from the penalty spot as the Ligue 1 champions came from a goal down to defeat Marseille 2-1 in the French capital on Sunday, thus taking the Swede's tally to 110 goals in just 133 games in all competitions.

Previous record-holder Pauleta had taken five years and 212 matches to reach his tally of 109 but Blanc pointed out that Ibra is one of the game's most unique talents.

"This is a very good player, a great player," the PSG coach told Canal+.

"You just have to see the number of goals he scores. These are non-typical players, with non-typical statistics.

"It does not surprise me that he has managed to break this record in such a short time."

Michy Batshuayi had given the visitors the lead half an hour in at the Parc des Princes while Abdelaziz Barrada was denied an equaliser when his penalty was saved by Kevin Trapp.

Remy Cabella also had a late effort kept out by Trapp, with Blanc acknowledging his side did not have things their own way.

"We did not get to impose our game as we hoped,"the World Cup winner added."This was very difficult as Marseille had the guts to come and play in our half.

"Many teams say that but Marseille dared to do it. Marseille were very good during the first 25 minutes.

"We have not played a great match but we created chances and we could have had a third."