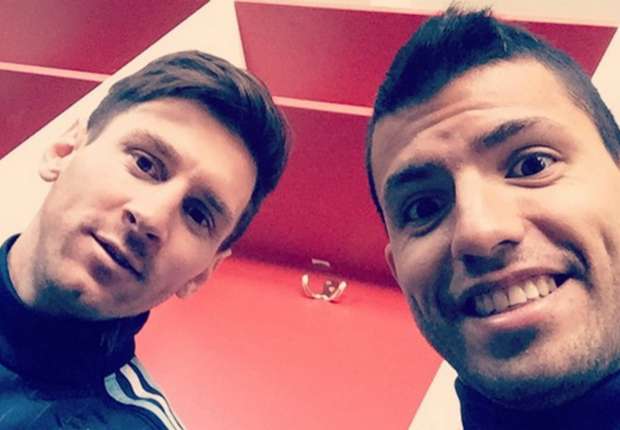 The jersey has belonged to the Barcelona star for almost a decade, but his team-mate is not fazed by the challenge of replacing him and leading the Albiceleste.

Sergio Aguero has revealed that he will take to the field on Thursday against Ecuador in Lionel Messi's No. 10 jersey, and pledged that Argentina will do everything possible to minimise the star's absence.

The shirt became famous for the Albiceleste thanks to 1986 World Cup legend Diego Maradona, and has become the Barcelona star's personal property almost ever since he broke into the national team.

And Aguero confirmed that he will take on the mythical number during the upcoming World Cup qualifiers against Ecuador and Paraguay.

"I spoke to the kitman and he told me it is obligatory - someone has to use it because the numbers go from 1 to 23," El Kun told La Nacion.

"I wore it for the first time against Bosnia, in a friendly in the United States, and Leo said:

'When I am not around, Kun has to use it.' Then he started to send me messages: 'Are you going to wear it? You're not going to chicken out?'

"Now every time he is absent it is up to me to wear it. I am happy to pull on the shirt, but it obviously belongs to him."

Messi will miss both Argentina's opening games in the Conmebol campaign, and is also a doubt for the second round of fixtures in November against Brazil and Colombia.

"It is a bit strange because Leo has always been here with us, but these things happen in football, we have great players here and we can do well without him," Aguero explained.

"Obviously it is different without him but we can still make a good start.

"Messi is Messi, he is irreplaceable. But there is a great team here which can make his absence felt less sharply. Now the key is winning, picking up three points. We are playing at home, it is a long time since Argentina has seen us and we have to play well from the start to gain confidence."