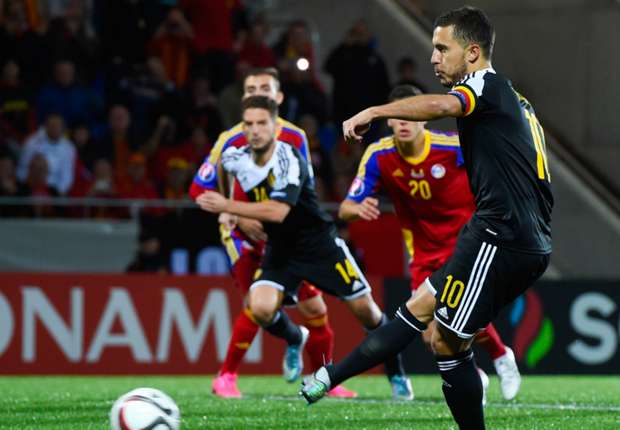 The stand-in captain helped his side secure their place in next summer's competition but spoke of his respect for opponents Andorra after the 4-1 win. Eden Hazard was delighted to help Belgium seal qualification for Euro 2016 with a 4-1 win over Andorra on Saturday.

The Chelsea winger wore the captain's armband in the absence of the injured Vincent Kompany and saw his side move top of Group B thanks to a comprehensive away victory, with the only negative being a goal conceded from the penalty spot early in the second half.

Radja Nainggolan, Kevin De Bruyne and debutant Laurent Depoitre were the Belgium scorers along with Hazard, who had two opportunities from the penalty spot and scored one, but had his second effort saved.

After reaching the World Cup quarter-finals in 2014, Belgium have now reached the Euros for the first time since they co-hosted the event in 2000, and Hazard was delighted to get the job done.

"Qualifying is always nice," the 24-year-old - who has now scored five goals in his last seven internationals - told RTBF.

"In this game, we did the job well and we deserve to qualify. They did not want to be walked over but overall we managed the game well except for the first 10 minutes of the second half.

"Some of their players have asked for my jersey during the game but I did not have enough to give them! It is always nice. They have the chance to play against the professionals - we must remember that they are amateurs. We have a lot of respect for them.

"It will be a game to savour on Tuesday in front of our own fans - we will have a nice party. We are in France now and it feels nice."

On missing his second penalty attempt of the match, Hazard joked: "

The goalkeepers are getting to know me now!"

Belgium's final qualifier on Tuesday is a home clash against Israel, who need a positive result if they are to stand any chance of beating Bosnia-Herzegovina to third place behind Marc Wilmots' side and Wales.