15yr Old Boy Disguises As A Girl, Sneaks Into Female Hostel To Peep At Their Nak3dness (Photo)


A 15-year-old boy identified as Yusuf Saleh has been arrested by the Zamfara state police command after he disguised as a girl and sneaked into the girlsâ€™ dormitory at the Federal College of Education (Technical) Gusau, Zamfara State. 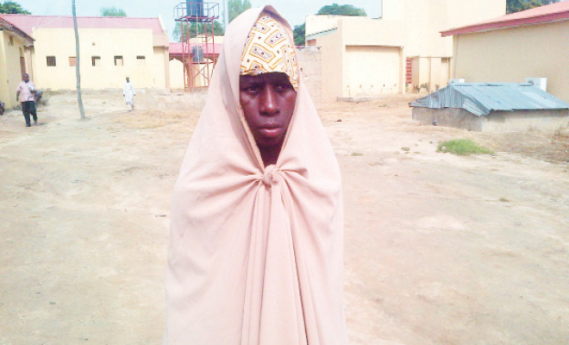 His discovery threw the school into pandemonium as the students thought he was a Boko Haram member who was there to attack them.

President of the Student Union Government of the college, Maryam Ibrahim, said Yusuf was seen wearing a wrapper, Hijab and a headscarf, adding that one of her colleagues who was able to reveal his real identity drew the attention of other students and he was quickly caught and handed over to the college security personnel. When interrogated, Yusuf said he dressed as a female so he can avoid being denied access to the hostel. He said he was just there to see how the hostel looked like.

The state Police Public Relations Officer, DSP Sanusi Amiru confirmed the incident and said investigations is ongoing and that the suspect would be charged to court soon.