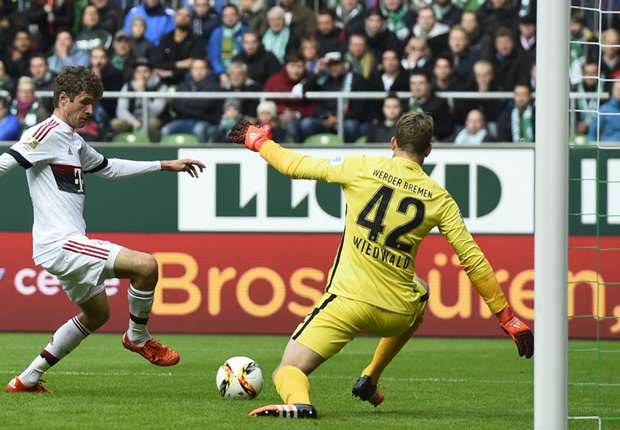 The 26-year-old voiced his joy after his goal helped extend die Roten's record perfect start to the season.

Thomas Muller was thrilled as Bayern Munich made history by becoming the first team to win their first nine Bundesliga fixtures with Saturday's 1-0 triumph at Werder Bremen.

The Germany international broke the deadlock midway through the first half after being set up by Thiago Alcantara, with die Roten settling for a narrow victory despite creating a number of chances to net a second.

And while Muller admitted he was more concerned with the win as compared to the record, he was still pleased to see his side accomplish the record.

"We got the full three points regardless of whether it is a record or not," Muller told Bayern's official website.

"But it is obviously a great feat. That is a tough job to repeat for any team.

"We dominated proceedings and got a few more good chances in the second half. We saw some hectic situations in the Bremen area.

"We would obviously have liked to score a second goal, because it remained a tight affair right until the end.

"We put in a fine performance overall, though."

Pep Guardiola's men have a commanding lead at the top of the Bundesliga table with 27 points - seven ahead of title rivals Borussia Dortmund.

Their win at Weserstadion ensures they head into Tuesday's Champions League clash against Arsenal in the best possible form.