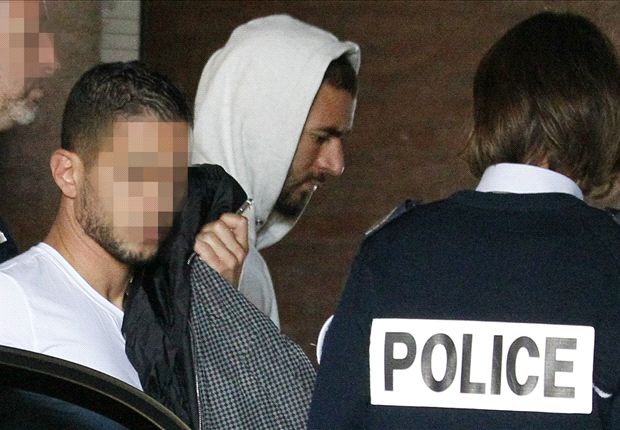 The Real Madrid striker has been charged with conspiring to blackmail his compatriot - but what sentence could he face if convicted and what exactly is he alleged to have done?

WHAT HAS BENZEMA BEEN ACCUSED OF DOING?

Karim Benzema has been charged with conspiracy to blackmail France team-mate Mathieu Valbeuna over an alleged sex tape.

The criminal case came to light on October 13 when ex-France forward Djibril Cisse was among four people being questioned by police.

Valbuena later defended Cisse â€“ who denied any involvement in the attempt to extort money from his former Marseille colleague and was released without charge â€“ by suggesting the 34-year-old "conducted himself as a friend by trying to help me".

The scandal, which is reported to have started in June, unravelled further on Wednesday when it emerged that Benzema had been arrested in France.

The Real Madrid striker's lawyer, Sylvain Courmier, insisted "he has done absolutely nothing wrongâ€ and is confident he could â€œfinally put an end to this painful controversy", but on Thursday he was charged by Versailles police.

Respected news agency AFP claim a source in the investigation admitted Benzema approached Valbuena "on behalf of [Karim's] childhood friend" who had previously been contacted regarding the sex-tape extortion.

Benzema's lawyer subsequently told reporters: "Karim has shown he is of good faith. He's played no part in blackmail. His friend Valbuena is in his prayers."

IF FOUND GUILTY, WHAT COULD HAPPEN TO BENZEMA?

At this point it has to be stressed that Benzema has not been convicted of anything and he remains innocent until proven guilty.

But, should the 27-year-old be convicted of the charge of complicity in attempting to blackmail Valbuena, he could face a maximum prison sentence of five years.

In the meantime, Benzema is forbidden from meeting with or contacting the Lyon attacking midfielder, who is yet to comment on the latest revelations in the blackmail case.

He has returned to Madrid with the judge having chosen not to confiscate his passport.

BUT IS THIS WHY HE WASN'T SELECTED FOR FRANCE'S LATEST SQUAD?

Benzema's exclusion from Didier Deschamps' squad â€“ announced minutes after he was charged by French prosecutors â€“ for the matches against Germany and England was always expected.

The striker has not featured for Real Madrid since sustaining a hamstring injury in the October international break as France defeated Armenia 4-0, a game in which he scored twice prior to his substitution.

"Karim is injured and therefore not in the squad," Deschamps told reporters on Thursday. "Regarding the recent events, I don't know all the details of the case, but I have little doubt justice will do its job."

Valbuena's exclusion is more contentious. The 31-year-old is not injured and has played eight times for France in 2015, but Deschamps said: "He is not in the best condition psychologically. I have taken the decision to give him some rest."

BENZEMA'S HAD RUN-INS WITH THE LAW BEFORE, HASN'T HE?

Yes, Benzema has a colourful history with the judicial systems in France and Spain.

In January 2014, Benzema and Bayern Munich winger Franck Ribery were acquitted in Paris of soliciting an underage prostitute.

The case judge ruled there was not enough proof that the France duo were aware Ms Dehar was not 18 years old â€“ the legal age of consent with a prostitute in Germany and France.

More recently,Cadena SER reported that Benzema was stopped by police on October 29 in Spain for committing an illegal turn and was in turn accused of driving without a valid licence.

Marca claim the traffic violation has been fast-tracked and Benzema will stand trial on November 23 at 10:00 CET.

Two years ago, Benzema had his licence suspended and was fined â‚¬18,000 for speeding, and six months ago he was punished for the same offence en route to