Lagos Banker Who Wanted To Be Rich At All Cost Duped Of N2.5m By Herbalist 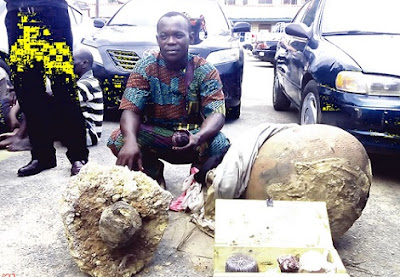 A herbalist, Seye Olufokunbi, has narrated how he defrauded a Lagos banker, identified simply as Lekan, of N2.5m. The 33-year-old said he told Lekan, who worked in one of the banks on the Victoria Island, that the money was for a special soap.
He said he lied to the banker that the soap, when kept in a box for two days, would produce a lot of money.
The money magic was said to have failed, leading to a petition to the Lagos State Police Command’s Rapid Response Squad in February 2016.
The operatives were said to have trailed and arrested the suspect at his base in Ijebu Ode, Ogun State.

The suspect, who spoke with our correspondent at the command headquarters in Ikeja on Tuesday, said he was initially selling herbs to Lekan before the banker told him to perform money ritual for him.

He said, “I have known Lekan for a long time and he is my customer. He was initially patronising me for herbs for his ailment.

“But he later approached me for money ritual, saying the money he was making as a banker was not enough for him. I said I could do it if he could give me N2.5m. He brought the money and I gave him a bar of soap. I told him to keep the soap in a box for two days, after which he should check the box and he would see a lot of money.

“He did that, but it failed, he then reported me to the police, who arrested me.”

The suspect, who claimed to have been into the job since 2011, said he was a member of a syndicate.

He explained that he got N500,000 from the money the victim paid, while the rest of the money was shared among the group members.

“I was initiated into this job by my brother. My ex-wife, whom I divorced after a disagreement, is not aware I am doing this. I was doing this because after I finished studying Business Administration in 2002 in a polytechnic in Oyo State, I couldn’t get any good job,” he added.

The Police Public Relations Officer, SP Dolapo Badmos, advised members of the public to be wary of those they transacted business with, adding that the suspect would be arraigned in court at the end of investigation.

“We are still hunting for the fleeing members of the syndicate and at the end, we will make them face justice,” she added.