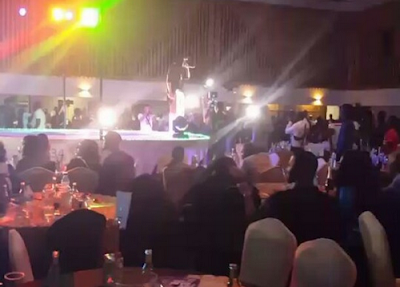 Terry G has once again lived up to his name. Last night at Comedian Bash's comedy show which held at the Muson Centre, Terry G once again showed the world his ‘bad’ side, when he slapped Dj Jimmy Jatt’s boy who was holding the table down for him. According to the report, the singer was misbehaving on stage and all efforts to get him off stage proved abortive which made the show organisers ask the DJ to put off the music. This made Terry G verbally angry, while rushing to where the poor DJ was standing and gave him a dirty slap before walking off the stage. CodedNEWSng were there and below is how they are reporting it.

And Chris Brown never touched anyone in the US, yet they sue him for misplacing their hats at his concert, Lol. Imagine if this happened in the States.
Click to read more