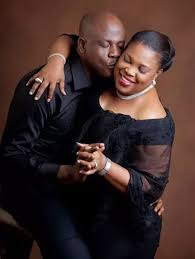 Her arrest followed intelligence sharing by the Department of State Service (DSS) and the Economic and Financial Crimes Commission (EFCC).

Mrs. Obanikoro was picked up over the ongoing investigation of her husband, who is wanted for questioning over the N4.745billion slush funds from the Office of the National Security Adviser

Mrs. Obanikoro, who was transffered by the DSS to the EFCC, was later released by the anti-graft agency after a bail. Her international passport was impounded. Sources said her bail is with the condition of surety support of a landed property owner in Lagos. She was requested to return on Monday for interrogation.

According to sources, Mrs. Obanikoro allegedly arrived in the country last weekend from the United States.

It was learnt that she was arrested by the DSS in Lagos while sorting out some documents relating to the ongoing investigation of her  husband.

“We got a report that Mrs. Obanikoro had sneaked into the country from the United States. After the confirmation of her travel log, an alert was issued to all security agencies.“Following intelligence sharing with the EFCC, the operatives of the DSS arrested her in Lagos with some documents relating to the probe of the N4.745billion slush funds from ONSA.Another source spoke of excitement about Mrs. Obanikoro’s arrest because “some of the funds under investigation were wired into her company, which is called MOB.

“She needs to explain to this commission what job she did to deserve such remittance into her account,” the source said.Responding to a question, the source added:

“Mrs. Obanikoro had sued the EFCC for the enforcement of fundamental human rights for allegedly harassing her tenants and in-laws during the course of investigating her husband.”The N4.745billion cash was sourced from the SAS Imprest Account of the Office of the National Security Adviser (ONSA) under ex-NSA, Col. Sambo Dasuki (retd.) prior to the conduct of Ekiti State governorship poll on June 21, 2014.

Some Bureaux de change firms have also been fingered as having some roles in changing N759, 384, 300 (out of the N4.745billion) into dollars.

A curious aspect of the landmark findings by the EFCC was how Obanikoro, as a minister, flew N1.219billion to Akure for Fayose a few days before the governorship poll.

According to documents obtained by TheNation's correspondent, EFCC crack detectives discovered that a firm, Sylvan Mcnamara Limited, allegedly owned by Obanikoro and his sons,   was used to launder the N4.745billion.