Pakistani social media celebrity Qandeel Baloch has been killed by her brother in an apparent 'honour killing' in the province of Punjab. 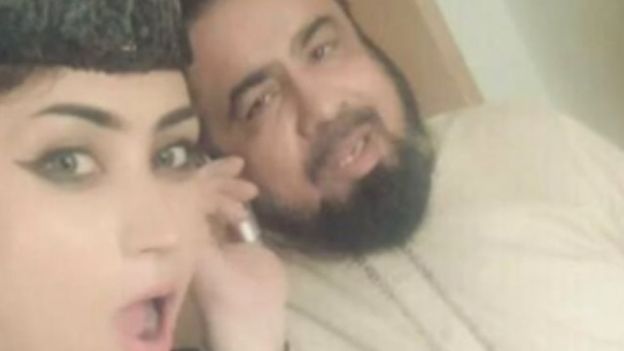 Ms Baloch, 26, recently caused controversy by posting controversial pictures of herself on social media, including one alongside a Muslim cleric. Qandeel Baloch became a household name for posting bold, sometimes raunchy, photographs, video and comments.

Police say she was strangled to death.

Her parents told The Express Tribune that she was strangled to death on Friday night following an argument with her brother.

They said her body was not discovered until Saturday morning. Her parents have been taken into

Ms Baloch had gone to Punjab from Karachi because of the threat to her security, police say.

"[Her] brothers had asked her to quit modelling," family sources quoted by the Tribune said.Sources quoted by the newspaper said that Wasim was upset about her uploading controversial pictures online and had threatened her about it. Police said he had not been arrested and was on the run.

Qandeel Baloch used social media to find fame and the reactions there showed the feelings she inspired, from admiration to disgust.

Some called her death "good news" and even praised her suspected killer. Others said it was wrong to condone her murder, even if she was flawed. Some showed outright support.

Qandeel Baloch has been dubbed Pakistan's Kim Kardashian. There are comparisons: the provocative selfies, the pursuit of celebrity, the controversial rise to notoriety.

But in Pakistan, women, especially poor ones, still lack basic rights, from schooling to choosing a husband and violence against them is rife. The country struggles with sexuality and especially with "immodest" women.

The fact that many of Qandeel's videos went viral suggests a titillating fascination with confident female sexuality - along with fear of its power and of her assertion of independence. However she lived her life, tweeted one, it was her life.

Ms Baloch rose to fame in Pakistan in 2014 when a video of her pouting at the camera and asking "How em looking?" went viral.

In a recent interview she was bitterly critical of Pakistan's patriarchal society and described herself as a leading exponent of girl power.

While many younger people saw her as a cultural icon and hailed her liberal views, she was also subjected to frequent misogynist abuse online.

Her request for better security was ignored by the government, Dawn reported, despite pleas made three weeks ago to the interior minister and other senior officials.

Hundreds of women are murdered every year in Pakistan in so-called honour killing cases.