An artisan, Mr. Ndifreke Ibuotenang, 28 and pictured below, has claimed he was brutalized on Thursday by the some group of policemen in Akwa Ibom. 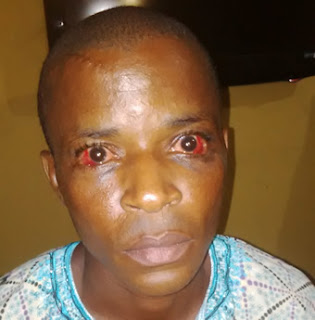 Ibuotenang said he was returning from where he went to drink palm wine around 9pm, when a group of policemen attached to Mkpat Enin Police Division in Akwa Ibom State accosted him and beat him to a pulp.

Ibuotenang’s two eyes were seriously affected. He said he was released after the payment of N10,000

When contacted, the state Police Commissioner, Murtala Mani, said the police had already commenced investigation into the case and all the policemen involved were in detention at the police headquarters in the state. He said:

“We have already started investigation into the matter. We have detained all the policemen involved. I interviewed the victim close to three hours yesterday (Monday). If the culprits are found wanting, they would be dismissed and prosecuted.”