Photos: Unarmed black man with hands up gets shot by Miami police


This is the shocking moment an unarmed black therapist was shot by police, even though his hands were up as he desperately tried to calm his autistic patient . 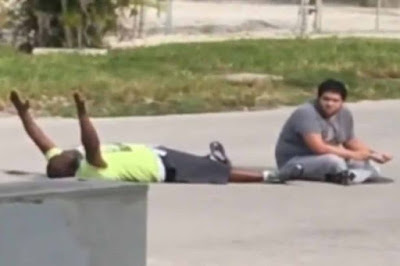 Charles Kinsey was hit in the leg by a bullet, despite lying on the floor with his hands in the air throughout the entire incident.

The shooting occurred in North Miami, Florida, on July 18 after police responded to an emergency call from a member of the public, who claimed they had witnessed a man walking around with a gun threatening suicide.

Mr Kinsey had been looking after his 23-year-old patient, who was playing with a toy truck, after the

man had run away from his group home.

He added that the toy truck was clearly visible to police at the time of the incident.

But as Mr Kinsey lay down on the ground, with his hands in the air, an officer shot him in the leg , despite him attempting to explain the situation.

In the footage, Mr Kinsey says:

"All he has is a toy truck. A toy truck. I am a behaviour therapist at a group home."He is then heard begging his patient to lie flat on the pavement and keep still. 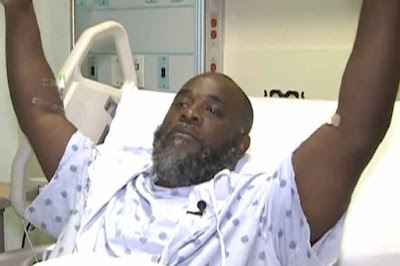 "I was really more worried about him than myself. I was thinking, 'as long as I have my hands up...they're not going to shoot me'. Wow, was I wrong."I said [to the officer], 'Sir, why did you shoot me?' And his words to me, he said, 'I don't know'."He added:

"My life flashed in front of me. When he hit me, my first thing I'm thinking, I'm thinking about my family."Mr Kinsey's lawyer, Hilton Napoleon:

"There's no justification for shooting an unarmed person who's talking to you and telling you that they don't have a gun, and that they're a mental health counsellor."The case is now being investigated by North Miami Police and the State Attorney, MirrorUK reports.