All protocol(s) observed By Reuben Abati 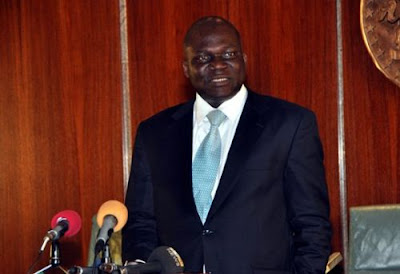 The engine of governance in fact runs on this special fuel, which in many ways has become an occasional excuse for waste and idleness. I have in the course of work attended and compered many of such events; one thing that I find curious is the obsession with acknowledgements. If you are the compere at any typical Nigerian event, the organizers are bound to give you what they call a protocol list, usually a long list of persons whose presence must be acknowledged.

You are also expected to recognize persons, especially if they are government officials, according to an established ranking order.

This means you can’t recognize a Member of a State House of Assembly before a Member of the House of Representatives, and you can’t “acknowledge the presence (as it were) of” a Minister before

a Senator. Any slight mix up is likely to fetch you a reprimand and complaints about how you are such an insensitive compere who wants to ruin an event that had been so well planned. Getting the pecking social order right is not even enough, you must be politically correct when you deploy such egoistic phrases as Your Excellency, The Distinguished, The Most Honourable, Your Honour, Your Worship, My Lord, Your Grace, Your Eminence…Only God knows what these honorifics do to the Nigerian big man or big woman’s mind.

When you get it right, you can see the person actually believing the myth about he or she being so excellent, distinguished or honourable. Some would even rise and wave to the crowd.

The institutionalized flattery involved, is of course not limited to the special guests, sorry special guests of honour (!) who occupy the high table, or the top table, or better still, the reserved table. Other guests also have to be introduced. The rule is never to overlook any important person. If it is a government or corporate event, nearly everybody is important. If certain persons are mistakenly overlooked, they would insist on sending their personal assistants to the compere to remind him or her of how a grave error has been committed. Some would send their business cards, or a note or summon the compere to their table to register not a complaint but a protest!

Indeed, being a master of ceremony at a Nigerian event could be the ultimate test of humility and human patience. I once introduced a certain VIP as Chief XYZ. I was summoned and reprimanded.

“He is not a Chief, but a High Chief”, he said. Correction taken, apology offered. “It is now my pleasure to introduce once more High Chief XYZ, the whatever 1 of anywhere.”

The man grinned cheerfully. His retinue of assistants applauded so loudly, you would think the event was all about him. There certainly must be something special about being a High Chief; ordinary Chiefs, I guess, must be less human. But consider this: on another occasion, I mistakenly referred to another VIP as a Chief. The man sent for me, and whispered into my ears: “next time you call me a Chief, I’ll sue you, only unserious people go about saying they are Chief this and Chief that. I have never taken a chieftaincy title in my life; I am simply Mister. You understand? ” Yes, sir!

Again, apologies tendered. I went back to the microphone to introduce the Mister properly, cleverly leaving out his anti-chieftaincy commentary. But how do you deal with royalty? Now that many Nigerians act and behave like Republicans, traditional rulers and the royalty have also learnt to leave the comfort of their palaces to hustle like other Nigerians on the streets, and so, you can’t miss royal presence at most events. But there is a challenge, acknowledging them. You have to know who is His Royal Highness or which traditional ruler is better addressed as His Royal Majesty.

To play safe, it is always advisable to refer to every traditional ruler as His Royal Majesty. It doesn’t matter if the man is a common village head. The word “Royal” is where the magic lies. Leave it out, and you’d have palace jesters rushing to you to insist you emphasize that special phrase. To get the protocol right, the titles of female guests of honour must also be properly mentioned, the problem is knowing who is what: Yeye, Erelu, Lolo, Alhaja, Hajia, Dame, Mrs, Miss or Ms. And there is at least one female VIP who objects to any young compere mentioning her first name: she says that is rude! “I am old enough to be your mum, and you know my dear, we are Africans!” Etiquette lesson taken: “Sorry Ma.” Not to talk of the Igwes. the Knights of numerous Saints, the Otunbas and holders of honorary degrees who insist on being addressed as “Dr.”

By the time a Nigerian compere struggles with these imposed standards, half of the time is wasted on absolutely unimportant niceties. And wait a minute, most of the guests would arrive late anyway and insist on being seated close to the high table, at a visible location, preferably in full view of the television cameras. Important guests like to be noticed; they want to appear on television and have their photographs taken by photojournalists who criss-cross the floor, blocking people’s view, blinding guests with camera flashes, thus constituting extra nuisance. But the real notice-me tactic often adopted is when in the middle of a programme or a speech, some really self-important guest arrives noisily and holds everything up, making a song and a dance, sashaying across the hall. The compere is expected to suspend the programme and massage the ego of the latecomer: “Announcing the arrival of….”

I imagine it is precisely because of this elevation of bad conduct into a side event, that nobody is allowed to arrive late at any event where the President of Nigeria is already seated. The security people will not allow such breach of protocol. And if anyone at all must be allowed in, he or she would have to sneak in quietly and no official compere would dare announce such rude arrival. That is another delicate protocol matter, though.

Then, the speeches: no event is complete without speeches and do Nigerians love to make speeches? Oh yes. Most of the time, many of the speeches are unnecessary. Those who are not supposed to say a word are invited to say a few words and they take an hour. There is so much repetition, with some speakers not having enough sense to leave out what has already been said. You are also likely to find someone who starts with “I don’t have much to say” only to go ahead and bore you silly. Or, some would start with: “I’ll try to be brief.” When you hear this, it’s better to be on your guard. Be prepared to listen to a rambling sermon. Even when time is allotted for every speech, this is usually ignored. I have been at events where the microphone was deliberately muted when the speaker started wasting time. Some speakers would still insist that they should be allowed to finish whatever they believe they are saying and they’d go on rudely, without the microphone!

Then, the acknowledgements: Every speaker begins with a long list of acknowledgements: Your Excellency, the President of the world, Your Excellency the Governor of this, Your Excellency the Governor of that… (if ten or twenty governors are in attendance, some speakers will mention each one of them by name!), and the Distinguished Senator whatever, The Right Honourable somebody, My Lords, spiritual and temporal….this alone may go on for close to five minutes. Before then, the compere would also have taken about five minutes giving the biography of the speaker. And he does that with every speaker, who again takes the microphone and repeats the same protocol list, only to end it all with “All protocol(s) observed.” Sometimes, all protocols are not just observed but “duly observed”, followed by the ritual of time-wasting salutations.

And in some cases, the protocols are “respectfully and fully observed.” The truth is that speakers don’t have to worry about protocol being “duly, respectfully or fully” observed. Career diplomats often protest that these phrases are incorrect and offensive. But this has not stopped speaker after speaker adopting similar short cuts: “Madam Chairperson, permit me to stand on existing protocols”. Or: “Ladies and Gentlemen, allow me to adopt existing protocols.” On one occasion, a speaker said: “I am sitting on existing protocols, Mr. Chairman.” That was something novel except that it didn’t stop the next speaker from standing on the same protocols that someone had just sat upon.

Elsewhere, in Britain, United States, Canada, and Europe, when speeches are to be made, people don’t sit or stand on protocols and there are no long introductions and acknowledgements. The speeches are delivered in a pre-arranged order, promptly, briefly and to the point. And of course, the guests arrive on time. Prefacing a speech with “Ladies and Gentlemen” is considered adequate. Here and in other African countries: Kenya, South Africa, Uganda, Namibia, Ghana…the reverse is usually the case. We should perhaps begin to worry about African protocol, very much like African Time (!). Our public events and ceremonies could become more purposeful and business-like, however, if we dispense with lengthy introductions of titles and biographies.

I once embarked on the onerous task of measuring the time spent on protocol at a particular event: two full hours. The main business of the day - an award ceremony - was just a little under an hour!