A motorcycle rider, identified as Monday Onoja, hanged himself on Tuesday in the Ijebu Igbo area of Ogun State. 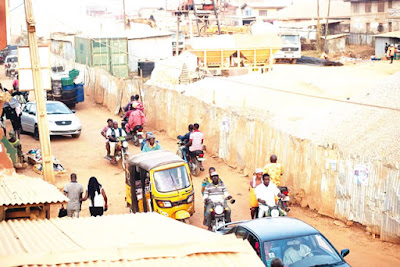 Monday, 45, who had been incapacitated after an accident, was said to be dependent on his wife.

It was learnt that the father of five expressed dissatisfaction with his life the previous day and threatened to kill himself.

Efforts by his wife, Esther, and a relative to make the Benue State indigene change his mind

The victim was reported to have woken up early and hanged himself in his room.

The corpse of the motorcycle rider was discovered around 8am at the victim’s residence on Ogunnaya Street, Ojowo, Ijebu-Igbo.

Esther told PUNCH Metro on the telephone that she was bathing one of their children when her attention was called to the dangling corpse of her husband.

“We have been married for the past 15 years and we had five children together. While he was a commercial okada rider, I am into trading. He was on his motorcycle on May 3, 2016, when he was involved in an accident.“He broke his leg. Since that time, he had been staying at home and we had been managing the little I could provide for the family.“Although he had yet to fully recover to start working again, he had started using crutches.“Last night (Monday), he said he didn’t want to eat rice, that he wanted something else. Later, he threatened that he would kill himself. I begged him not to, but he shunned me. I called one of his brothers, who also came to talk to him. But he said he would sell his motorcycle and return to the village.“This morning (Tuesday), I was bathing our child when one of the other children came to call me that their father was dangling from the ceiling. I ran there and met him dead.”A resident, Mr. Kehinde Ogunbanjo, told Punch that the deceased killed himself because he could no longer provide for his family.

“The accident really affected him. He was depressed due to financial difficulty and because he could not provide for his family,” he said.A source said policemen from the Ijebu Igbo division had visited the scene.

He explained that the police did not go with the corpse because it was the tradition of the town that whenever anyone died in that circumstance, certain rites must be performed before burial.

“The Osugbo cult will take the corpse away. The police only took the statement of the wife,” he said.The Police Public Relations officer, Muyiwa Adejobi, confirmed the incident, adding that the police did not suspect any foul play.

Adejobi, a Superintendent of Police, however, said the victim’s wife in her statement claimed she met her husband’s corpse after returning from their children’s school, where she had gone to pay school fees.

“The man’s wife, Esther, reported at the station that she went to the children’s school to settle their school fees and on her return, she discovered that her husband, Monday, had committed suicide by hanging himself with a rope.“Detectives visited the scene and took pictures. All necessary arrangements have been put in place to move the body to the mortuary. No foul play suspected, while investigations are ongoing.”