Two pensioners of the Benue State Civil Service slumped on Wednesday during a protest staged by retirees under the umbrella of Concerned Benue Pensioners in Makurdi, the state capital. 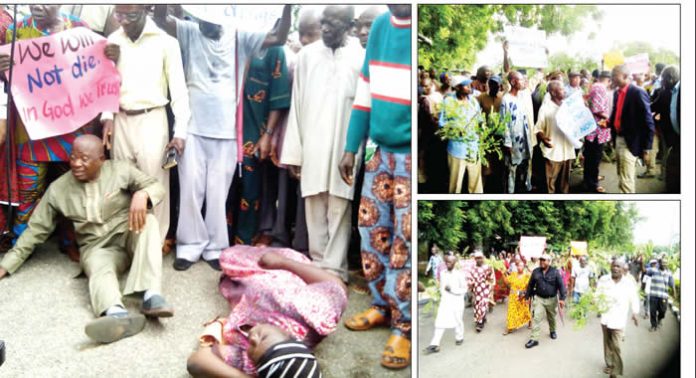 The retirees staged the protest against the Benue State government over alleged unpaid entitlements and gratuity which spanned 11 months.

The protesting pensioners took to the streets of Makurdi carrying placards with various inscriptions demanding for the immediate payment of their pension arrears.

It was during the protest that two of them allegedly slumped and became unconscious. All efforts to revive the affected retirees proved unsuccessful. They were taken to an undisclosed hospital for medical attention.

Some of the inscriptions on the protesters’ placards read: ‘’Gov Ortom fulfill your campaign promises’’, ‘’Do not starve us to death,’’ ‘’Pay us our pension’’, ‘’We are more than 30,000 pensioners and we are dying like chickens everyday’’, “We are unable to buy our drugs’’, “Our children have stopped going to schools” and so on.

The protesters barricaded the popular CBN- Government House Roundabout causing gridlock for several hours while all efforts by security operatives to calm them down and allow free passage of vehicles failed until they finally decided to move themselves to the main Government House.

The protesters were received at the Government House by the Acting Secretary to the Benue State Government, Dr. Bem Meladu, commissioners of finance, education and the Head of Service.

Presenting their protest letter to the SSG for onward delivery to the governor who was said to be out of the state, the Chairman of the Concerned Benue Pensioners, Mr. Peter Ikyado, said the protest would not end if the state government failed to attend to their plight.

He added that his members were tired of “continued failed promises” by the state government on the payment of their pension arrears.

Ikyado said, “We had variously addressed letters on the issue of our unpaid benefits to President (Muhammadu) Buhari, Governor Samuel Ortom, the state Head of Service and other relevant stakeholders including the media. This is because we pensioners feel that we have suffered enough and have been short-changed. Irregular pension payments have become the order of the day. The payments do not even reflect what the pensioners should be earning due to lack of harmonisation of pension rate increases over the years.”

The chairman, who could not hold back his tears while delivering the speech, had to discontinue with it and directed his secretary to complete the message.

Meanwhile, the Acting SSG, Bem Meladu, appealed to the protesting pensioners to be patient with the state government as all measures were already in place to commence the payment of pensioners in the state.