The Court of Appeal on Thursday upheld the election of Yahaya Bello as the duly elected governor of Kogi State. 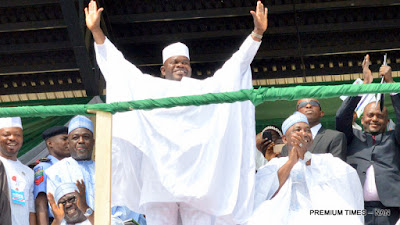 Details of the judgment is still sketchy, but Premium Times reporter covering the case said Mr. Bello prevailed in the appeal brought against him by James Faleke, a member of the House of Representatives.

Mr. Faleke had challenged the emergence of Mr. Bello as governor and asked the tribunal to declare

him governor because the election of late Abubakar Audu was almost concluded before he died.

Mr. Bello was nominated by the APC to replace its late candidate, Mr. Audu.

Mr. Faleke ran as deputy governorship candidate with Mr. Audu and they were coasting to victory before Mr. Audu suddenly died.

INEC declared the election inconclusive and asked the APC to nominate a replacement for the deceased. Mr. Bello was nominated and he nominated Mr. Faleke as his deputy, an offer the latter refused.

But on June 6, the Election Petition Tribunal, sitting in Abuja, dismissed Mr. Faleke’s petition, saying the lawmaker was unable to prove his case.