Lexi Sinclair, who has a four-month-old son called Christian, was approached almost as soon as she arrived at the pool. 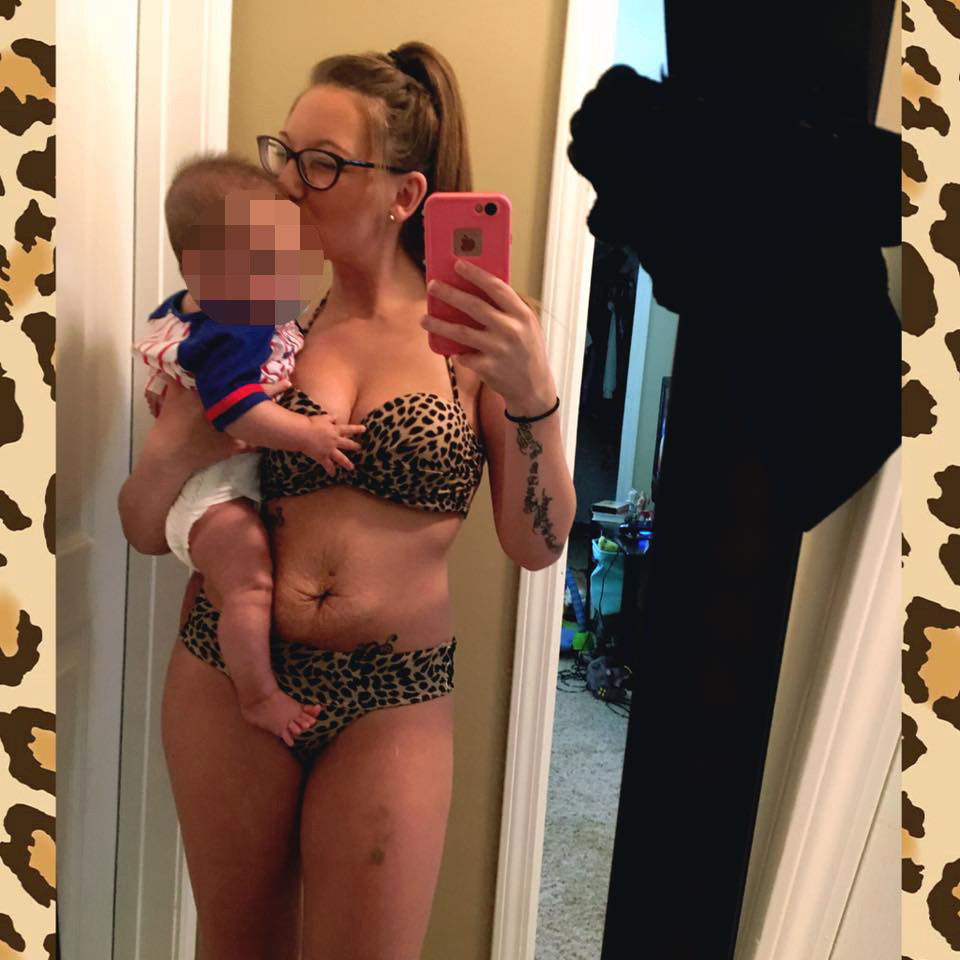 Swimming costume she was wearing when she was body-shamedWhat started off as a friendly conversation with the woman, who was thought to be in her mid 50s, the stranger then started to lay into Lexi’s outfit, telling her it was “not appropriate for a mother”.

Lexi, who is from Kansas City, Missouri, was horrified at being laid into by a fellow woman, who was apparently worried that pervy men might not approve of what they saw.

Writing on Facebook, Lexi continued: “She then proceeded to tell me that the men at the pool would feel more comfortable if I was in a one-piece swim suit because a bikini isn’t appropriate for a mother, especially one who’s ‘still recovering’.

“Anyone who knows me knows I had a few words for this crazy, ballsy woman.

“But instead I just smiled, kissed my son and told her, ‘I’m proud of my body.

“‘In just one year I’ve gained 50 pounds, and lost 37. I’ve grown a human and given birth to a beautiful miracle. My body provided food for my child.

“‘So, no, my body might not be the best sight for other men to see. My stretch marks and tummy pudge might not be sexy.

“‘But they’re proof that I’ve done something amazing, and I have a man that loves me and finds me even sexier and more beautiful now.

“‘To be honest, I don’t give a tiny rats a** what other men, or a prissy twit like you think. Have a nice day though.’”

Lexi’s post has gone viral, with well over 23,000 shares, and dozens of  people have spoken out in support of the mum.

Among them was Marilyn Patch Gates-Dueitt, who wrote: “You look great, your tummy is going down very nice for only four months after delivering a baby.

“You should be proud. Ignore the lady and the guys who supposedly said some also.”

Brenda Sanchez White added: “I love this! People are crazy! Any woman/mother should have the confidence to wear whatever they want! And you look great!!!”

“People will always have their rude and insensitive comments, she was probably jealous!”

Amber Marie Chavez  added: “I can’t understand why people think it’s ok to say those things and not feel bad if they hurt anyone’s feelings!

“Those people should just mind their own business. Good on you for saying what you did.”

Lexi later joked: “I took a very deep breath before I responded, because my first thought was to punch the hag in her face.

“Trying to be a better person since I have a kid now though.

“I didn’t expect it to be an issue. I’ve seen much worse lol.”

After receiving so much support, she added: “In regards to my post yesterday, I NEVER expected the responses I’ve gotten.

“The support from my friends, family and STRANGERS is amazing.

“I’m so thankful for all of you, and I’m glad I could help boost so many other women’s confidence!”

Lexie told CNN: “I think it’s gotten so big because so many people can relate to how it feels to be body shamed.

“Not just mothers but anyone who’s a little bigger, or smaller than what the expected norm is.”