Lagos State Police Command has arrested some suspected members of Eiye Confraternity, who allegedly used a residence on Halidu Avenue in Shibiri, in the Okokomaiko area of the state, for cult activities, Punch reports. 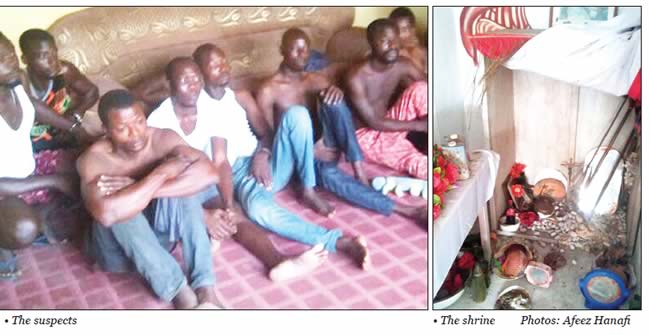 Other suspects are Samson Okpe, 32; Paul Jago 30; Saheed Oriyomi; 32; and 29-year-old David Quenum from the Republic of Benin.

The police said the residence belonged to one Mrs. Rosemary Lawrence, who lives on Old Marine Road, Apapa.

According to Punch Metro, a shrine, where new members were initiated, was uncovered by a team of policemen who stormed the compound at about 5am on Saturday.

It was gathered that wraps of drugs suspected to be cannabis were also recovered from the scene.

A police source told our correspondent that some operatives had been on surveillance of the area prior to the arrest of the suspects.

“There was a shrine in an apartment on that premises, where the suspects used to meet and initiate new members. We got information that the gang was initiating new members and we stormed the compound. Some of the suspects are siblings. We have been keeping a close watch on the group’s activities for some time. They are Eiye Confraternity members,” the source said.The Lagos State Police Public Relations Officer, SP Dolapo Badmos, confirmed the arrest, adding that the Commissioner of Police, Fatai Owoseni, had directed that the suspects be charged to court.

“At about 11.30pm on Friday, information was received that a house on Halidu Avenue, Shibiri, owned by one Mrs. Rosemary Lawrence, was allegedly being used for the initiation of cultists.

The place was raided and nine suspects were arrested. Some wraps of weeds suspected to be hemp were recovered in a shrine allegedly used for the initiation of new members. The suspects are still under investigation.”