The Lagos State Police Command has arrested a 60-year-old man, Highsent Nwogu, for allegedly producing dollars worth N3m and defrauding residents of the Ogba area. 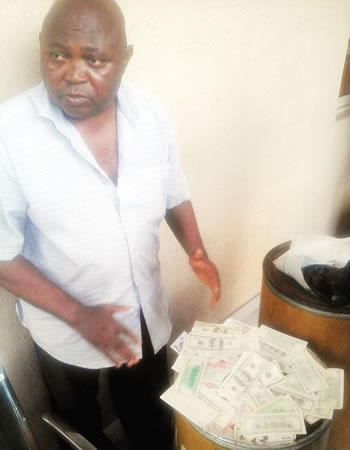 According to Punch, Nwogu, a father of five children and grandfather of three ventured into the “washing” of fake dollars to make ends meet.

Punch correspondent learnt that Nwogu, who hails from the Umuahia-South Local Government Area of Abia State, used a rented apartment on Abimbola Street, College Road, Ogba, for illegal production of the dollars.

It was also learnt that Nwogu would ask his victims to buy some goods from overseas, and thereafter offered to get dollars for them to pay for the goods. The suspect allegedly gave his victims the fake dollars.

It was gathered that a victim of the suspect, identified as Hellen Olajide, who was defrauded of about N1.95m, reported the matter at the Area G Command, Ogba, and Nwogu was thereafter arrested.

The police said fake dollars worth N3m, chemicals and water drums allegedly used by the suspect were recovered from his apartment.

The man said he began the business four years ago, He admitted defrauding the lady of N1m, adding that he had refunded N400,000.

“I used a room in my house to wash the dollars. My wife and children were not aware until the police arrested me.

My clients did not suspect anything. I started currency production about four years ago. I have been arrested by the police on two occasions. This is the third time. I learnt how to produce the money in the Iyana Ipaja area. It was in August that I met Hellen (Olajide). When she found out that I had defrauded her of over N1m, she threatened to call the police, but I assured her that I would refund the money. She later called the police to arrest me. I want the government to forgive me. I collected N10,000 from my first victim, N30,000 from my second victim and N50,000 from another. I have three persons working with me; I used the money to solve my family problems.”The victim, Olajide, said she paid the money in three instalments after Nwogu and his accomplices had hypnotised her to pay for the goods.

“I was returning from work on that day, when three men accosted me and said I should follow them to a place to transact business. They said they were into importation and exportation of goods such as computer sets and Brazilian hair. I am sure they used some charms because it was after paying money the third time into a bank account I was given that my senses came back. It was after a month that I cried to the police for help. I want the syndicate to return my money, which is N1,992,000.”

She said, “The command learnt of the case, after which operatives trailed and arrested the suspect. He belongs to a syndicate that defrauds members of the public who want them to create wealth. We are on the trail of the accomplices.”