They Use Miss Anambra Contestants As Executive Prostitutes Apga Alaigbo 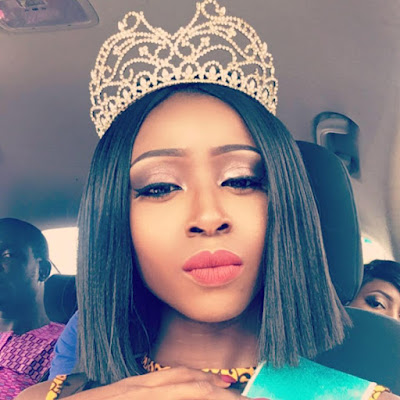 The drama is yet to end. Earlier today we posted the statement by former Miss Anambra Chidinma Okeke where she said her 'blackmailers' are threatening to shoot her if she reveals the 'truth' of what really happened. Now, a certain man, Apga Alaigbo has made some startling allegations, claiming that a certain Mr Uche Nworah who heads Anambra Broadcast Service (ABS, the organisers of the beauty pageant) he brains behind the alleged blackmail. He also alleged the contestants in the Miss Anambra pageant are used as Executive prostitutes as they send them to sleep with people. He pointed to the fact that Chidinma handed over her crown in office, when she ought

Okwodi mmadu nwe ogodo ewu na ata [It is someone that owns the wrapper the goat is chewing] .

We know that some Girls have long throat and that puts them into trouble ,but some where forced by circumstances of hardship to become a victim or promise from High and Might that makes them to believe that Messiah second coming has come to them earlier .

For Days now the LORDS of ABS TELEVISION ,the MD UCHE NWORAH who prefer to call self “NWA ABA” has been reigning supreme as KING of FRAUD over the Young and future Hope of the state ,making them miserable and lost for personal aggrandisement and personal Lust .

I am not against the money he is making from ABS which he never accounted for because he will send Innocent Girls who came for Industrial Training or who entered for the ABS PAGEANT as SEX PAY OFF to the Authority and because he supply them Young Girls for sexual satisfaction ,he became untouchable.

What they do to pretty girls that went to ABS for IT ,is something for another day not today’s discussion .

The Government certainly cannot say that they were,nt aware that ABS always sent out GIRLS that came to enter into the PAGEANT into the street in a SCAM they called “ONE MILLION GIRLS” ,this Girls will be giving 10 FORMS to be sold at 100,000 NAIRA EACH ,then the mission is for each to sale 10 SONSORSHIP FORMS at 100K ,meaning you make 1 MILLION NAIRA for ABS HUNCHO ,that automatically qualified you for the 21 contestants ,that is after they have finished using your PRIVATE PART as breakfast ,Lunch and Diner .So in cause of selling the FORM ,you caught HIV or any VENERAL DIEASE they will simply wash hands off you and move on to those that get them the money . The health and faith of the Girls does not matter ,what matters is to satisfy the Urge of this Brutes and using this Girls as executive Prostitutes that will make them money and nothing more .

The Girls that are unfortunate not to have people that can buy the FORMS from them are placed under ABIOLA JINADU the SUPER NUMBER 1 PARTNER of the Boss ,that is talking about when he wants to DO lady and KC when he wants to DO MALE ,both ABIOLA and KC acts like a PIMP for BOSS whenever he wants to satisfy his BI SEXUAL URGE .

If this ONE MILLION GIRLS cannot meet the target ,ABIOLA will arrange for the Girls to be PIMPED OFF ,some time to ABUJA, ENUGU, ASABA and where ever there is call to go and service any man that can pay directly into the coffers of the BOSS ,just transport fares for the Girl with marching Order to go –SERVICE AND RETURN .

It is when they make enough money that they will tell the Girl that She has met the target and then she can be enrolled into the 21 .

Where on earth do they expect this Girls to meet Men that can give them 100K per FORM and on what basis ? they simply turn this innocent small girls to EXECUTIVE WHORES and ruin them for life under the watchful eyes of the Government, under the banner of same Government that swore to protect them .

We continue talking about THE BOSS who abandoned the Wife and Children in LONDON and came to Nigeria to live a life that disgust even SATAN himself .

Back to ABS ,they abandoned NEWS and NEWS related and now they delve into BEAUTY CONTEST turning our children into Sex slaves and the WOMEN in the state kept quiet . Securities too weak to investigate and the scam continued .

Presently they forced an innocent Girl who won the treacherous MISS ANAMBRA to continue being a victim and when She said enough is enough ,She became subject that must be gotten rid off .

The Girl returned her CAR and Her CROWN after several threat to her life ,after they promise to end her future ,but that was just the beginning ..

What is the ROLE OF IFEANYI AND OKWUOTO in the shooting of the CUCUMBER SEX TAPE ?

WHO are the men behind the Camera during the recording ?

Where did they rent for the shooting ?

Where this GIRLS KIDNAPPED and force under Duress to act as LESBIANS ,so it can be used in black mailing them knowing fully well that such presentation will repulse people and humiliate the Girls ?

Do the producers think NDI ANAMBRA so dumb that we cannot tell when a deadly set of people start acting like MAFIANS ? ,,We certainly know that there is no way , if both girls are LESBIANS for they to stand a VIDEO and record self and then release it later ,sure ABS may have done a dirty deal and that must be why they forced the girls to become a Victim of blackmail .

Watch the Video ABS released on the 11th of October the same day they leaked the CUCUMBER VIDEO,. Why cut short the reign of a beauty queen inside an Office ,when she was crowned in the public and why recording the return and use DATE STAMP on it ?

She returned the Car and crown, so the car will be used for another victim.

Maybe because they want to wash hands off the beauty queen before offering her as sacrifice .

Maybe they realise that the hate campaign will boomerang on the Government who gave her the crown that made her ambassador of the state ,so they forced her on VIDEO to return everything and made sure that they recorded the scene and leak same a day before the leak the SEX TAPE which they cannot feign ignorance of the recording .

Watch the defence of ABS and see how wicked they plotted the downfall of the young girl and now they have slated another trap for another Girl who they will also put under spell, then video her again for another black mail if she refused to succumb to perpetual BANGING.

They have set another date for another pageant, another scam and another scandal.

The Securities should look at the Video and decide where it was shot ,who and who where behind the Camera . There was a good Lighting in the Room meaning that STUDIO LIGHT were used to laminate the place .The Camera used is not PHONE or CAMCODER ,the recording must have been done with High powered HAND HELD DIGITAL DEVICE that can only be obtained at TELEVISION or professional Video Coverage .

How did it end up in the room where the so called CUCUMBER SEX where held ?

Why did they ask the Girl [Beauty Queen ] to get out from AWKA or she is a Finished girl ? why did it take the alarm from her friends to force the VAMPIRES in ABS to release the black mailing VIDEO shot under duress ?

Why is the state protecting this group of heartless beings ?

Why are they using ABS as protection and industry for SEX SLAVES ?

What is the qualification of UCHE NWORAH to be the Boss at ABS ? WHEN that position flows through the rank ,,meaning that the MD falls on the most senior and not some POLITICAL APPOINTEE .

Have we all wondered why ABS has EMEKA OZUMBA who is a serving SSA to GOVERNOR OBIANO on the day they rushed Chidinma to handover the Crown ,even though in everything pageant out going Queen will always crown the New one and that is the official handover and they do not hand over CAR ,but why did CHIDINMA handed over everything ?

Did EMEKA OZUMBA stand in for the Governor or he was there to make sure that the charade was a success ?

If the Governor surrogate was at the emergency handover ,how can we say with assurance that none of them where behind the Camera when they KIDNAPPED AND Ran THIS GIRLS in a fashion that made the Girls to appear as Lesbians ?

What the Ladies of influence in the state should do and every other person at that is not to blame this Victimized GIRLS but to take them to Deliverance ,for them to be delivered from the Evil manipulations they used to sear away the real mind of this Girls ,what they need is rallying behind them to exorcise them of the Satanic lust this set of Devils agent planted in them in course of time .

This Girls are not doing all this with clear eyes and until a deliverance is conducted .

The Video came in two segments meaning that it was edited and the Voices behind the Camera removed ,so it was edited in TELEVISION STUDIO and who has such reach ? having in mind that the organizer of the pageant has released a Video , 1 day after which made it appears as if Chidimma has returned her Crown ,then they release the BLACKMAILING VIDEO .

Can the Government say with finality that they had no hand in that ,and that SSA OZUMBA went there on his own accord ?

Where is the FIRST LADY OF THE STATE ? IS THIS NOT WHERE SHE SHOULD SPEAK OUT AND CRY OUT ? OR IS SHE WAITING FOR OBY EZEKWESIRI TO FLY DOWN AND LEAD THE CRUSADE ?

WHERE ARE THE FEMALE ACTIVITS AND POWERFUL MOTHERS IN THE STATE ? WILL THEY KEEP QUIET AS THIS SEX AND BLACKMAILING PREDATORS GOES SCOT FREE ?

Do we still have HUMAN RIGHT GROUPS IN THIS NATION ?

HOW ABOUT WOMEN LIBERATION GROUP ARE THEY GOING TO ALLOW THIS TO BE ANOTHER FORGOTTEN HISTORY ?