The Lagos State Police Command has arrested a hotelier, Victor Obano, for allegedly turning a 23-year-old female job seeker into a commercial sex worker in the Ijegun area of the state. 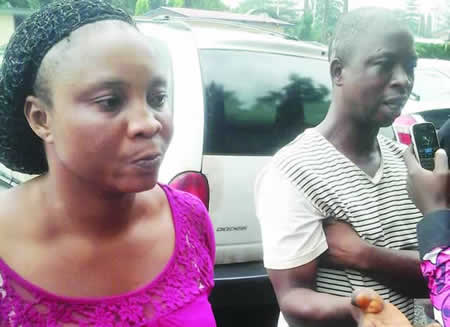 The police said Obano, who owned Tisa Hotel, allegedly lured the victim, Elizabeth, from Akwa Ibom, promising her employment in Lagos State. Obano allegedly thereafter turned the job seeker into a sex worker in the hotel.

According to Punch, Elizabeth, a mother of two, reportedly got tired of being a commercial sex worker, and on October 5, told her elder sister on the telephone what she was going through.

The sister was said to have informed the police at the Anti-Robbery Squad of the State Criminal Investigation and Intelligence Department, Yaba, leading to Obano’s arrest.

Punch gathered that another accomplice, a commercial sex worker, identified as Grace Edet, who allegedly was Elizabeth’s supervisor, was also picked up by the police.

Speaking with Punch at the command headquarters, Ikeja, Obano, who admitted to have brought the victim from Akwa Ibom, said he only assisted her to find a means of livelihood.

“I am the manager of Tisa Hotel in the Ijegun waterside. I am not a human trafficker. It was only this lady that I brought from the village. I met with her father and he explained her predicament. She is 23 years old. She has two kids and she was living a miserable life. So, I decided to get a job for her. The police arrested me because I seized her phones. They said I did not want her to contact her family members, but I collected her phone because I did not want her to have an affair with several men. It was her elder sister who reported the matter to the police. The victim is with her brother presently. The arrangement was that I would be paying her and she would also hustle in the hotel and send the money to take care of her father. The police should let this matter be settled amicably. It is a family issue.”The accomplice, Edet, told our correspondent that Obano had instructed her to train Elizabeth in commercial sex.

“I have worked in the hotel for some years. I am a commercial sex worker. When the manager came back from Akwa Ibom earlier in the year, he returned with the lady. He handed her over to me, saying I should teach her some tricks of the trade. I did not know the arrangement between them. When I asked the lady why she was brought, she replied that she was asked to hustle at the hotel. So, I do not have any fault in the matter.”A police source told our correspondent that Obano allegedly had more girls he used as commercial sex workers in his hotel.

The state Commissioner of Police, Fatai Owoseni, who paraded the suspects, said the command would not tolerate any form of crime, urging the public to always avail the police of credible information.