A 40-year-old man, Victor Emafolomi, has been detained by the police for allegedly raping his wife’s daughter, Keji. 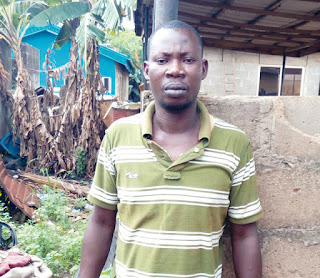 PUNCH Metro reports that the suspect was apprehended on Sunday by the police from the Agbado division after the mother of the victim reported the case.

Keji (pseudonym) lived with her mother and Emafolomi on Olukososi Street, Jafa, Agbado, in the Ifo Local Government Area of Ogun State.

Emafolomi was said to have raped Keji on two occasions in October, threatening to kill her if she

It was gathered that the first time she was raped, Keji was at a shop where she was learning hairdressing within the community when her stepfather called her on the telephone to come home to prepare lunch for him.

While the teenager was immersed in the cooking, Emafolomi reportedly descended on her and dragged her into the bedroom.

She said, “That afternoon, he was drunk. He beat me up when I resisted. I explained to him that he was like a father to me, but he didn’t listen.  He used a pillow to cover my mouth and raped me. He said he would kill me if I told my mother about the rape.

“Two days after, he had sex with me again. That evening, he beat me up because I insisted that I would tell my mother when she came back from work. He went out and came back with two men after about 30 minutes. The men stared at me and left. He said they would be monitoring my movement and that if I reveal what he did to me, they would kill me.”

Our correspondent gathered that the suspect left home after the second encounter and did not return until about two weeks later.

“Before the incident, he had warned a boy called Owolabi to stay away from me because he didn’t want us to have a relationship,” Keji added.

Keji’s mother, Taiwo, who told PUNCH Metro said she was abreast of the time her daughter usually menstruated, said she became worried last Tuesday, October 24, when Keji did not do so.

“I took her to a clinic in our area and it was confirmed that she was pregnant. I begged her to tell me who impregnated her, but she refused,” Taiwo said.

After much pestering, Keji was said to have confided in her mother, who reportedly passed out afterwards.

“I was very shocked, but I could not fault the revelation because my husband had abandoned home for some days and there was no misunderstanding between us. I think it was because of what he did,” she added.

However, the suspect, who hails from Delta State, refuted the allegations, saying it was Owolabi, who impregnated Keji.

He said, “I am a driver. I left home because my wife is stubborn; she doesn’t take corrections. I left home to punish her so that she would change for better.

“I never had sex with her daughter and I didn’t know anything about the pregnancy. I don’t want it aborted. When she is delivered of the baby, we will carry out a DNA test on the baby.”

The Ogun State Police Public Relations Officer, ASP Ambibola Oyeyemi, said the case would be transferred to the command’s headquarters in Eleweran, Abeokuta, for further investigation.

“The victim confirmed that the suspect had carnal knowledge of her several times and the pregnancy test conducted on her was positive,” he added.